It is said that history repeats itself and we should learn from past mistakes, however it seems that America has missed some of the lessons. Often times I hear many of my peers say what they would have done if they were alive during the time of the civil rights movement…well now is your time to find out! Given the events that has taken place over the past three years that has struck the #BlackLivesMatter movement we notice a pattern within the American Justice system, that Black Lives really Don’t Matter. #BlackLivesMatter has become more than just a hashtag on social media but an actual wake up call to the world that We, Black people, African-Americans do indeed matter and now we want everyone to recognize it. Of course with every Affirmative you must have a Negative. Some will argue that we shouldn’t just focus on “Black Lives” because “All Lives” matter and without a doubt “All Lives” should matter, but we have seen time and time again where apparently they don’t. Cleary the All Lives Matter people were not around when Africans were being stolen from their native lands and sold as slaves and held in captivity and bondage for years, when did All Lives Matter then?

Just in case the harsh reality of slavery is a bit to devastating to even think about, let’s speed up the time shall we, to 2007 when pro football player Michael Vick was sentenced to twenty-three months in prison because he participated in dog fighting. Not in any way justifying what he did but let’s be honest it’s been proven several times in the year 2015 alone that a dog’s life is worth more than the life of a Black person. In fact, one dog’s life is worth more than nine Black Lives, given the tragic murder of nine African-Americans in South Carolina while attending church, Dylan Roof decided that it would be ok to take the lives of innocent people who did nothing but show him kindness. When Dylan was found he was not gunned down nor hog tied and thrown into the back a police car but simply hand cuffed and was properly escorted to the car. Although, everyone is not that lucky. Sandra Bland for instants, a young Black women from Chicago Illinois, “was found dead in her cell three days after being arrested for allegedly failing to use her turn signal on July 10. She was 28”. Says CNN reporter Ed Payne. Bland had returned to Prairie View Texas where she had received her Bachelor’s Degree at Prairie View A&M University. She was offered a job there. When leaving the campus she was pulled over by Waller County officer Brian Encinia. He ordered Bland to get out of her car because she “seemed irritated” and refused to put out her cigarette. Even though there are no laws preventing smoking a cigarette in your own car but nevertheless once Sandra exited her vehicle she did not have the luxury of simply being handcuffed and placed in the police car like Dylan Roof, (although she had no business being arrested in the first place) she was ordered to get on the ground where her head was then slammed into the pavement by Encinia after stating several times that she had epilepsy. But people are still saying that All Lives Matter. 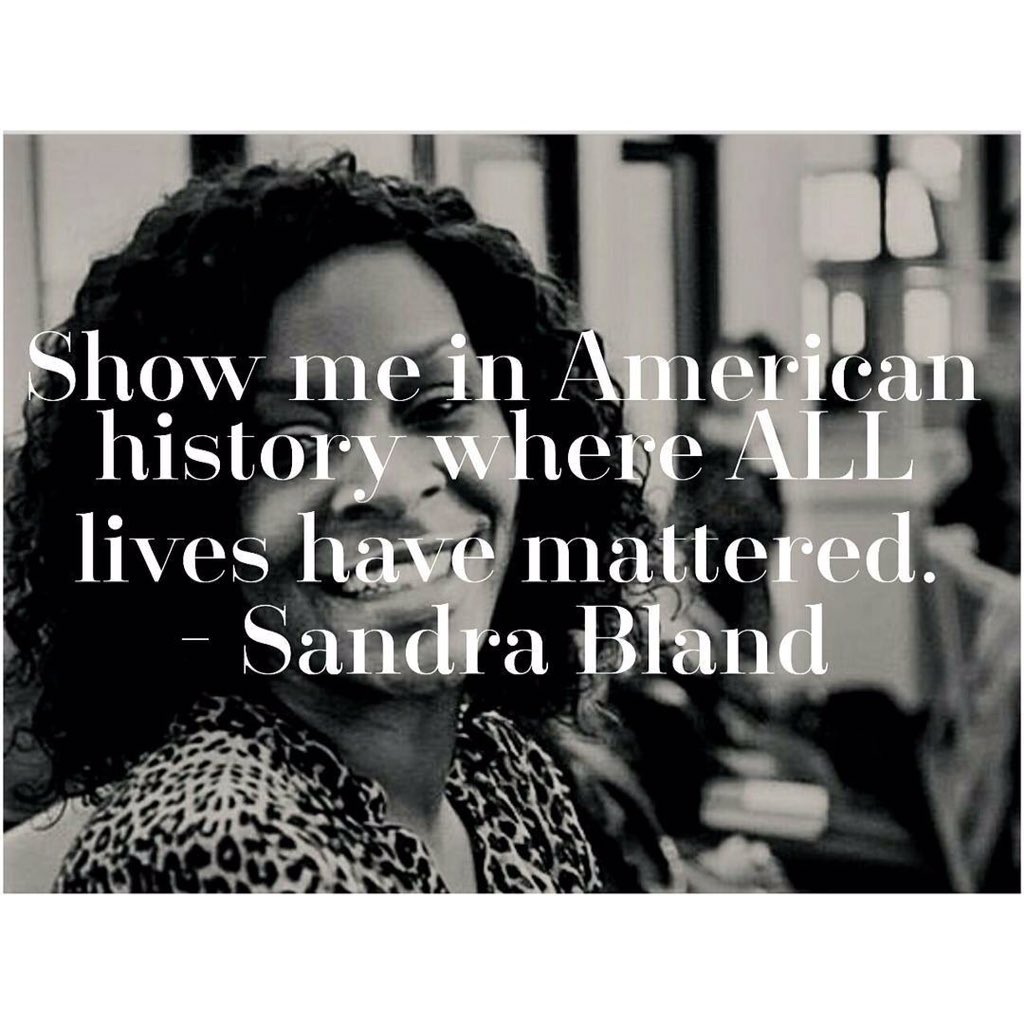 What about Trayvon Martin, the young Black teenage that was gunned down by George Zimmerman. Zimmerman was clearly in the wrong and had no right to go after nor shoot young Trayvon, but was still found not guilty in the charges brought against him. There was a recording of the 911 call where the dispatcher told Zimmerman not to pursue Martin but he did it anyway. But All Lives Matter right? What about the case of Emmett Till in 1955 A young Black teen murdered by to white males for allegedly whistling at a white women. Till was kidnapped and beaten and shot, still no one was convicted for his murder, even after the two males admitted to killing Emmett Till. Let’s not forget the officers that beat Rodney King in 1991 and was acquitted in 1992 after being caught on camera during the act. Clear evidence. What about Mike Brown, Corey Jones, Tamir Rice, Eric Garner and the list goes on of Black Lives that are now just hashtags to those who yell “All Lives Matter” but where, where do their lives matter to the rest of the world when the justice system constantly shows that they don’t? Where is the justice for those who have lost their lives to trigger happy police officers and racist fools that believe that All Lives Matter? Has justice really become blind? So yes, indeed All Lives do Matter but evidently all lives except Black Lives.

“Show me in American history where All lives have mattered”