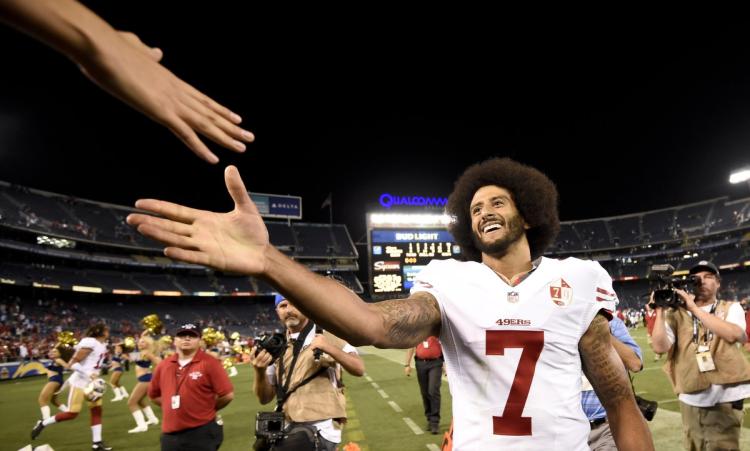 Weeks ago NFL San Francisco 49ers quarterback Colin Kaepernick decided to take a stand by sitting down during the National Anthem at one of the team’s preseason games. Kaepernick says “I am not going to stand up to show pride in a flag for a country that oppresses black people and people of color.” He has even started sporting his luxurious hair in an Afro.

Kaepernick is tired of the police brutality that has occurred in America and wants no parts of participating in the National Anthem. Now of course because of his decision to take a stand for something that he believes in there are some people that are not happy, tweeting out racist comments such as these.

I wonder why Colin Kaepernick would protest the National Anthem & proclaim America to be White Supremacist nation? pic.twitter.com/YNXIZ1VHT0

Although some are outraged that Colin Kaepernick is not falling for the “okkie dokk,” the 49ers released a statement following kaepernick’s decision “The national anthem is and always will be a special part of the pre-game ceremony. It is an opportunity to honor our country and reflect on the great liberties we are afforded as its citizens. In respecting such American principles as freedom of religion and freedom of expression, we recognize the right of an individual to choose and participate, or not, in our celebration of the national anthem.” Chip Kelly 49ers football coach, also stated  “his right as a citizen” and said “it’s not my right to tell him not to do something.” The coaches and the team should respect Colin’s views for not wanting to stand during the National Anthem, in fact more athletes should do the same and take a stand for what they believe and stop being just overpaid glorified players. Colin is biracial and was adopted and raised by white parents but he still understands the injustice towards Black people in America and is willing to stand for his beliefs and not just look the other way. In my book Colin Kaepernick is the real MVP!